For the second time in as many months, the Quincy City Council has spoken out for the future of our planet, as well as sound fiscal management and Quincy residents’ health. On May 1, councilors passed a resolution on the use of electric vehicles in our city fleet, which would save the city money, help clean up the air we breathe, and help reduce the emissions of the greenhouse gases that are causing worldwide climate change. Then on June 2, they passed a resolution related to the justly unpopular plans for the Fore River gas compressor station. END_OF_DOCUMENT_TOKEN_TO_BE_REPLACED

On May 1 the City Council approved, by a 9-0 vote, a resolution urging Mayor Koch to explore the acquisition of electric vehicles (EVs) for our city fleet. On behalf of Quincy Climate Action Network, I’d like to thank the councilors for their vote, and especially Councilors Joseph Finn, Noel DiBona, and Nina Liang, who cosponsored the resolution. END_OF_DOCUMENT_TOKEN_TO_BE_REPLACED

NASA satellite image of snow cover, which helps moderate temperatures by reflecting sunlight back into space. Satellite measurements from the 1960s to the present show a 10 percent decline in annual snow cover.

Prof. Stephen Young, a geographer from Salem State University, will return to Quincy on March 15, 2017 to deliver a lecture on his original research into climate change. Cosponsored by Quincy Climate Action Network and the Thomas Crane Public Library, the lecture will take place at 7 p.m. at the library in Quincy Center

Two years ago, Young gave a well-received lecture in Quincy on evidence of climate change in New England. This year, he will lecture on how our warming climate is affecting snow cover in the northeast US and eastern Canada. END_OF_DOCUMENT_TOKEN_TO_BE_REPLACED 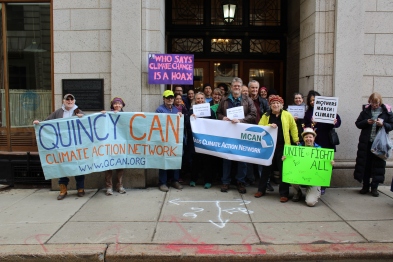 West Quincy resident Tom McGuinness, who attended the Boston Women’s March on Saturday January 21 with a delegation from Quincy Climate Action Network, said he “was awestruck by the sheer number of people” at the event—175,000, according to official estimates. The QCAN delegation marched alongside members of their parent organization, the Massachusetts Climate Action Network. “Going forward,” said McGuinness, “we will see more of these actions, and I hope they’ll convince the Trump Administration to acknowledge the threat of climate change and reassess their stance on clean energy.” END_OF_DOCUMENT_TOKEN_TO_BE_REPLACED

The Commonwealth’s omnibus energy law, enacted last summer, will likely pave the way for three big offshore wind projects that promise to supply a total of 1,600 megawatts of electricity, or about 15 percent of the total Massachusetts load, according to Amber Hewett, regional campaign coordinator for the National Wildlife Fund, who will lecture on the topic at the Thomas Crane Public Library, 40 Washington Street, Quincy at 7:00 p.m. on Tuesday, November 15.  Quincy Climate Action Network is cosponsoring the lecture with the library. END_OF_DOCUMENT_TOKEN_TO_BE_REPLACED

“U.S. Concern about Global Warming at Eight-Year High,” blared a March 16 headline on the Gallup polling organization’s website. With the biblical scale of rainstorms, droughts, wildfires, and hurricanes in recent years, the headline doesn’t come as a huge surprise. What’s more surprising is that more than one-third of Americans still worry “only a little or not at all” about man-made climate change. According to a recent documentary film, much of the credit, or blame, for such complacency goes to a richly funded campaign by lobbyists, public relations people, talk show hosts, fake experts, and public officeholders to shed doubt on the existence of climate change or—a fallback position—admit the climate is changing but deny that human activities have anything to do with it. The 2014 film, “Merchants of Doubt,” will screen on October 18 at 7 p.m. at the main branch of the Thomas Crane Public Library, 40 Washington Street, Quincy. Admission is free. END_OF_DOCUMENT_TOKEN_TO_BE_REPLACED

How you can help.

It's an easy way to make a difference, and it’s partially tax-deductible.
Sign up for a free home energy assessment.

What is your Carbon Footprint?

Use this Carbon Footprint Calculator and discover how you can conserve energy and save money today!